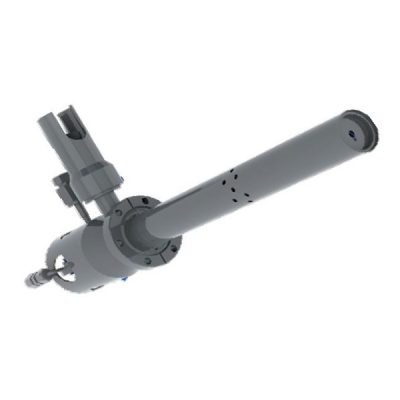 The HAT is a cost-effective atomic Hydrogen source. This source generates flux of atomic hydrogen through high temperature thermal cracking of molecular hydrogen (H2) with a hot tungsten filament.

It is also suggested that the growth rate in Ga-rich deposition of GaN is considerably enhanced under atomic hydrogen.

The dissociation efficiency is strongly dependent on the H2 pressure in the cracker zone and the filament temperature. Atoms of Hydrogen are produced by thermal cracking of high purity H2 gas. The source working temperature is around 2200°C.

All models are equipped with a water-cooling system to regulate the flange temperature.

HAT does not provide equivalent number of atomic species than with a plasma source, hence also releasing uncracked H2 in the growth chamber, but it’s a cost-effective technology to make atomic hydrogen available, whether it is for substrate cleaning or preparation, or to modify the growth atmosphere and favor growth rate in certain applications

Cracking efficiency has been measured using a quadruple mass spectrometer by measuring the decreasing of H2 partial pressure in the test chamber at a H2 flow of 0,1 sccm. The source was installed in horizontal position. The graph can be seen on the right.

The filament temperature has been determined by physical resistivity measurement using calibration data from J.A. Jones, Phys. Rev., 28 (1926). Note that those values may slightly vary, depending on your measurement system and on filament./source aging.